Aussies will fight terrorism – will we? 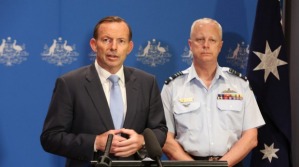 Australian Prime Minister Tony Abbot announced today that special forces troops and fighter jets would be deployed to fight ISIS in Iraq. The decision was made after a request for help from the US and was fully supported by the Opposition Leader Bill Shorten. If the same request was made to New Zealand would our Parliament show the same resolve ? Sadly I suspect not.

Too many New Zealanders think that our geographic isolation and relatively small size means we can hide from unpleasant and inconvenient international realities. Someone else will sort it out. However if we are to take our place with any respect in the community of civilised nations we should be willing to play our part in fighting barbaric evil movements such as ISIS.

I have made my donation to Tear Fund’s crisis appeal to provide aid for the thousands of civilians who have had to flee this “murderous death cult” as Abbot described them. However humanitarian aid alone will not be enough. Great evil needs to be engaged and defeated. In the spirit of ANZAC we should be joining our courageous Aussie mates.

2 Responses to Aussies will fight terrorism – will we?