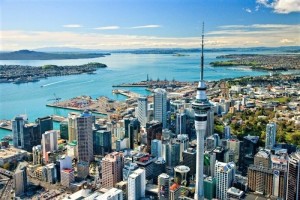 The water lapped brightly around the small boat. It was 1835. Henry Williams and his crew were sailing south through the Hauraki Gulf. As they passed the Waitemata, Williams recorded,

…was much struck with the beauty of the harbour, which is accessible at all times; it will some day make a valuable place, being by far the best anchorage and deep water. (1)

Later they paddled up the Tamaki inlet to Otahuhu. Williams noted the country was good and would “doubtless be very valuable at some future day”. The boat was then dragged over to the Manukau, “quite an inland sea” with Kauri trees “thick on the north shore”. However it was a quiet place. Hongi Hika’s raids some years earlier had seen to that. Williams lamented the many who had been killed in the area, and recorded there was “now not an inhabitant for a great distance”.

Were Henry Williams to return to the Tamaki isthmus today, he would be astounded. In less than two centuries it has blossomed into the flourishing metropolis of Auckland. With its gleaming high-rises, busy motorways, bustling harbour, and sprawling suburbs, it is the first city of our nation. And it is a nation which owes a debt of gratitude to Henry Williams. He stands a clear first among its founders.

Williams’ nation-making efforts in New Zealand began from the moment he stepped ashore in 1823. Wherever he went, Williams was relentless in proclaiming the Christian gospel, te rongopai, among Māori. It was a message he lived and breathed. For years te rongopai competed with the musket, for Māori hearts. However, eventually it prevailed. In the 1830s there was a spiritual awakening in the land. Social transformation followed. Where previously there had been tribal feuding, violence and cannibalism, now a new way dawned. What was written, came to pass – He makes wars to cease to the ends of the earth.

On this foundation of spiritual and social transformation, the next building block of our nation was laid. Civil government was established in the Treaty of Waitangi. Here again, Henry Williams was at the centre of the action. It is his Treaty translation, and explanation to the chiefs, for which he is most well known today – and most criticised.

It is now common to hear that Williams was either incompetent or disingenuous in his Treaty translation. Historian Paul Moon, for example, asserts that Williams was not “sufficiently conversant in Maori to undertake the responsibility”.(2) According to Moon, others were better suited to the task. It is a claim which buttresses the modernist view that Māori comprehension was misdirected at Waitangi. However, viewed alongside Williams’ life, it is a claim which is hardly credible.

Henry Williams spent seventeen years prior to the Treaty, living and working among Māori. He had sat beside campfires all around the North Island, engaging wherever he could in “close conversation” with Māori, young and old. Some had never seen a Pākehā. Yet he conversed with them in their own language. In those years Williams also learnt tikanga and culture. He became involved in tribal affairs. He “embedded” himself on war parties, travelling hundred of miles and spending weeks away, with the hope of mediating to avert conflict. He dealt with great chiefs, and negotiated matters of war and peace, life and death. If anyone was suited to translate and explain the Treaty of Waitangi – it was Henry Williams.

And contrary to modern opinion, Williams did not misdirect Māori comprehension of the Treaty with his translation. The records of the debate at Waitangi show the chiefs quickly grasped its essence. Williams’ explanations to them were also straightforward. Their land would be protected. And the Treaty meant that both Māori and Pākehā would now come “under one Sovereign, one Law, human and divine.”(3) That the Crown subsequently failed to keep the plain promises of the Treaty, is in no way a reflection on Williams. He played his part ably, and with honour.

Williams next appears on the stage of our founding history in January 1845. Hone Heke had felled the flagstaff and was fomenting dissension among the northern tribes. The Treaty was a trick, he said. The British were going to take their land. Until then most chiefs had opposed Heke. However a recent British parliamentary report had proposed that the Crown take ownership of all non-occupied “wastelands” in New Zealand. The report was not acted on, but news of it alarmed the chiefs. A large hui gathered at Paroa in the Bay of Islands. Perhaps Heke was right? Maybe they should join him in rejecting the Treaty and casting off the Queen’s Government it had established.

Into this highly charged moment stepped Henry Williams. Armed with copies of the Treaty he challenged the chiefs to find any suggestion their land was at risk. They could trust the British Crown. There would be no “tinihanga” or trickiness.(4) Debate continued for four days, but eventually the mana of Williams carried the day. The hui concluded with most chiefs reassured of their Treaty commitment, and rejecting Heke’s call to arms. Thus this early threat to our nascent nationhood was effectively extinguished.

Of course in subsequent years, governors and the settler administration found other ways to alienate Māori from their land. Tinihanga became all too common. Because of this it is easy to view Williams, and his reassurances to the chiefs, with the cynicism typical of our age. However, at the time, Williams had much reason for optimism. He had witnessed remarkable changes across New Zealand. And the British Empire itself was undergoing  unprecedented and promising change. The recent abolition of slavery was but one example.

In the midst of these heady days of progress, it is understandable that Williams’ vision was focused on a positive future for the land, and the people, he loved. Along with the chiefs who signed the Treaty, he looked to that future with optimism, hope and faith.

Indeed when the spiritual and governing foundations of our nation were being laid, good faith abounded. And no more so than in the life of Henry Williams – New Zealand’s original nationmaker.